On the Southern Edge of CampHill (NT 825322) there is a square wood called Bobs Wood.  It is planted with a mixture of hardwoods, Scots Pine and some Corsican Pine and is one of the best woods we have on Mindrum.  It is warm, always full of wildlife, and an excellent example of traditional forestry.

Bob’s wood is named for Bob Lee.  Bob was a local woodman and forester who lived at Mindrum with his wife Marcie.

When, some years into his retirement and in his early 70’s, he heard that the wood at the top of the hill was due to be felled and replanted, Bob asked whether he might be personally responsible for its replanting.

Bob planted the wood by hand and over the next 5 years, spent his summers in the wood with a hand hook, cleaning and weeding the young trees by hand.  It became known then as Bob’s wood and still is now.  By the time Bob was in his late 70’s the wood was already well ahead of its peers and is still significantly more advanced than any of the woods planted at the same time – something that is largely due to the care and energy that Bob has lavished on it over the years.

Even once Bob and Marcie had moved away to Wooler, he used to return regularly to visit the wood – and even with his failing eyesight, could still find his way around it.

Sadly, Bob and Marcie died a few years ago; Bob was well over a hundred years old, though for me, a part of him lives on, up at the top of the hill.  We proudly tell his story to visitors who come to Mindrum.

I have long thought that Bob ought to have a pipe tune written for him, though the tune has eluded me for some time.  I think we have finally found one – which has been called Bob’s Wood.

I was very privileged to be asked to say a few words at Bob’s Funeral.  In writing this, I reviewed my notes from December 2011  and thought I would include them here as they are still relevant.

Throughout history, men and women have been defined by what they leave behind them. Whether it be the Great Pyramids at Ghiza, the roof of the Cystine Chapel, the literary works of Shakespeare or the Magna Carta, we are lucky to have been left a legacy by those who have gone before. Through this legacy, these people still persist.

Bob Lee was a Forester; a woodman …..his legacy to us is trees and woodland. The tricky thing with trees, is that there is a long time between when they are planted to when they mature. They change a great deal, collectively and individually, in that time and produce many different pictures as they grow.

As living things…. they influence the picture too, and whilst they flourish if given the right start and then looked after, they wither and die if not managed properly. There are no shortcuts – you either get it right …. or you don’t.

A craftsman who works in trees must have the vision to look far ahead in time, must be prepared to paint a picture that he will probably never see (though in Bob’s case, he made a pretty good stab at outliving his creations!); he must create something in the faith and the knowledge that someone else will reap the full benefits of it.           Proper forestry is all about vision.

Though it strikes me that it would be a fascinating project to map the woods he created and see where they are now, Diane has asked me to be brief….(!) and I will confine myself to the story of one particular wood, one that is very close to my heart ..and a story that is very typical of Bob.

This wood lies at the very heart of Mindrum, on the South side of Camp Hill, on the northern edge of the Cheviot foothills and looks South West across the Bowmont Valley up onto the North West slopes of The Cheviot itself.

Some years after Bob had officially retired (I think he was comfortably into his Seventies), we needed to replant this wood, the previous trees having finally reached the end of their life. Bob volunteered, indicating that he had nothing better to do (given the active social and family lives he and Marcie led , this was not entirely true!).

In his typically charming way, he was very clear (and not a little forceful) about how he felt the wood should be designed and was given totally free range as to how it would be delivered. 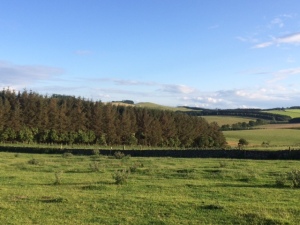 I can still remember him planting the wood by hand; each row carefully designed and placed so that he knew exactly where each tree was (or was supposed to be).

For the next four or five years, he would often be seen, quietly cleaning the trees by hand. I can still remember him, a lone figure, up to his waist in long grass and willow herb, quietly working through the trees with a hand hook.

Now, nearly three decades later, Bob’s Wood (It couldn’t be called anything else) is one of the best woods on Mindrum, a patchwork of different species, it changes through the seasons, and provides warmth in the coldest of storms, and sunlit glades in the summer. It is always full of wildlife; it has trees which we are already thinning and a backbone of hardwoods some of which which will, I hope, survive for many hundreds of years.

In winter, it is one of our best pheasant drives, and is known by name by many of the people who are kind enough to come from all over the country to shoot with us. I am also proud to tell the story of the man who planted it.

Though none of us will ever see the wood in its full maturity, I am thrilled that Bob was able to spend some time in it when it was partially grown up. My children know it by name, and they know the story of the man who created it. I hope they will pass this story onto their children too for they might just see it developing as Bob originally intended.

Bob was a craftsman and a gentleman. I am proud to have known him, and even more proud that he and his legacy will continue to be part of my family’s life for generations to come.